Time in the United States

From Wikipedia, the free encyclopedia
Jump to: navigation, search

Time in the United States, by law, is divided into nine standard time zones covering the states and its possessions, with most of the United States observing daylight saving time (DST) for approximately the spring, summer, and fall months. The time zone boundaries and DST observance are regulated by the Department of Transportation. Official and highly precise timekeeping services (clocks) are provided by two federal agencies: the National Institute of Standards and Technology (NIST) (an agency of the Department of Commerce); and its military counterpart, the United States Naval Observatory (USNO). The clocks run by these services are kept synchronized with each other as well as with those of other international timekeeping organizations.

It is the combination of the time zone and daylight saving rules, along with the timekeeping services, which determines the legal civil time for any U.S. location at any moment. 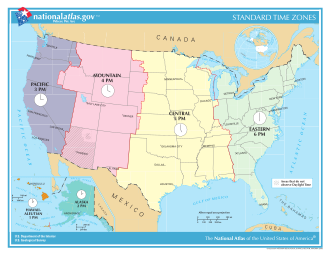 Map of U.S. time zones between April 2, 2006, and March 11, 2007. The current situation is different only in that several Indiana counties are now in the eastern time zone instead of the central time zone.

Prior to the adoption of four standard time zones for the continental United States, many towns and cities set clocks based on sunsets and sunrises at their locations and by observing the Sun’s zenith at noon (mean solar time). Dawn and dusk occur at different times but time differences between distant locations were barely noticeable prior to the 19th century because of long travel times and the lack of long-distance instant communications prior to the development of the telegraph.

The use of local solar time became increasingly awkward as railways and telecommunications improved.[1] American railroads maintained many different time zones during the late 1800s. Each train station set its own clock making it difficult to coordinate train schedules and confusing passengers. Time calculation became a serious problem for people travelling by train (sometimes hundreds of miles in a day), according to the Library of Congress. Every city in the United States used a different time standard so there were more than 300 local sun times to choose from. Time zones were therefore a compromise, relaxing the complex geographic dependence while still allowing local time to be approximate with mean solar time. Railroad managers tried to address the problem by establishing 100 railroad time zones, but this was only a partial solution to the problem.[1]

Operators of the new railroad lines needed a new time plan that would offer a uniform train schedule for departures and arrivals. Four standard time zones for the continental United States were introduced at noon on November 18, 1883, when the telegraph lines transmitted time signals to all major cities.[2]

GMT was superseded as the international civil time standard by Coordinated Universal Time (UTC) in 1960, when the International Radio Consultative Committee formalized the concept of Coordinated Universal Time, abbreviated as UTC. It is, within about 1 second, mean solar time at 0°.[3] It does not observe daylight saving time. It is one of several closely related successors to Greenwich Mean Time (GMT). For most purposes, UTC is considered interchangeable with GMT, but GMT is no longer precisely defined by the scientific community.

Standard time zones in the United States are currently defined at the federal level by law 15 USC §260.[4] The federal law also establishes the transition dates and times at which daylight saving time occurs, if observed. It is ultimately the authority of the Secretary of Transportation, in coordination with the states, to determine which regions will observe which of the standard time zones and if they will observe daylight saving time.[5] As of August 9, 2007, the standard time zones are defined in terms of hourly offsets from UTC.[6] Prior to this they were based upon the mean solar time at several meridians 15° apart west of Greenwich (GMT).

Only the full-time zone names listed below are official; abbreviations are by common use conventions, and duplicated elsewhere in the world for different time zones.

The United States uses nine standard time zones. As defined by US law[7] they are:

Zones used in the contiguous U.S.[edit]

From east to west, the times zones of the contiguous United States are:

Zones used in states beyond the contiguous U.S.[edit]

Zones outside the states[edit]

Some United States Minor Outlying Islands are outside the time zones defined by 15 U.S.C. §260 and exist in waters defined by Nautical time. In practice, military crews may simply use Zulu time (UTC±00:00) when on these islands. Baker Island and Howland Island are in UTC−12, while Wake Island is in UTC+12:00. Because they exist on opposite sides of the International Date Line, it can, for example, be noon Thursday on Baker and Howland islands while simultaneously being noon Friday on Wake Island. Other outlying islands include Jarvis Island, Midway Atoll, Palmyra Atoll, and Kingman Reef (UTC−11:00); Johnston Atoll (UTC−10:00); and Navassa Island, Bajo Nuevo Bank, and Serranilla Bank (UTC−05:00).

In Antarctica, the US research facility Palmer Station is in UTC−03:00, while McMurdo Station and Amundsen–Scott South Pole Station use UTC+12:00 in order to coordinate with their main supply base in New Zealand.

(Described from north to south along each boundary.)

Marker showing the border of Wayne County, Kentucky, and the Eastern Time Zone

The Energy Policy Act of 2005 extended daylight saving time (DST) for an additional month beginning in 2007. The start of DST now occurs on the second Sunday in March and ends on the first Sunday in November.

In response to the Uniform Time Act of 1966, each state of the US has officially chosen to apply one of two rules over its entire territory: