A borough is an administrative division in various English-speaking countries. In principle, the term borough designates a self-governing walled town, although in practice, official use of the term varies widely. Contents. 1 History; 2 Etymology; 3 Pronunciation; 4 Definitions ….. Jump up ^ Words Ending with Boro Archived 2012-04-26 at the Wayback ..

pounds are for the poor

in a future apartment

the king of a cloaked england, say’s douglas the israel of man united kingdom has been bombed & keeled over.

Capsized, Taken On Water, And Sinking. (your name is your nation, first middle and last.)

“Call for help” redirects here. For the TV show, see Call for Help.

A distress signal, also known as a distress call, is an internationally recognized means for obtaining help. Distress signals are communicated by transmitting radio signals, displaying a visually observable item or illumination, or making a sound audible from a distance.

A distress signal indicates that a person or group of people, ship, aircraft, or other vehicle is threatened by serious and/or imminent danger and requires immediate assistance.[1]:PCG D−3 Use of distress signals in other circumstances may be against local or international law. An urgency signal is available to request assistance in less critical situations.

In order for distress signalling to be the most effective, two parameters must be communicated:

For example, a single aerial flare alerts observers to the existence of a vessel in distress somewhere in the general direction of the flare sighting on the horizon but extinguishes within one minute or less. A hand-held flare burns for three minutes and can be used to localize or pinpoint more precisely the exact location or position of the party in trouble. An EPIRB both notifies or alerts authorities and at the same time provides position indication information.

Distress signals at sea are defined in the International Regulations for Preventing Collisions at Sea and in the International Code of Signals. Mayday signals must only be used where there is grave and imminent danger to life. Otherwise, urgent signals such as pan-pancan be sent. Most jurisdictions have large penalties for false, unwarranted or prank distress signals.

Distress can be indicated by any of the following officially sanctioned methods: 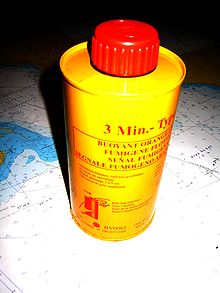 A floating man-overboard pole or dan buoy can be used to indicate that a person is in distress in the water and is ordinarily equipped with a yellow and red flag (international code of signals flag “O”) and a flashing lamp or strobe light.

In North America, marine search and rescue agencies in Canada and the United States also recognize certain other distress signals:

In addition, a distress can be signaled using automated radio signals such as a Search and Rescue Transponder (SART) which responds to 9 GHz radar signal, or an Emergency Position-Indicating Radio Beacon (EPIRB) which operates in the 406 MHz radio frequency. EPIRB signals are received and processed by a constellation of satellites known as COSPAS-SARSAT. Older EPIRBs which use 121.5 MHz are obsolete. Many regulators require vessels which proceed offshore to carry an EPIRB.

Many EPIRBs have an in-built Global Positioning System receiver. When activated these EPIRBs rapidly report the latitude and longitude of the emergency accurate to within 120m. The position of non-GPS EPIRBs is determined by the orbiting satellites, this can take ninety minutes to five hours after activation and is accurate to within 5 km. Marine safety authorities recommend the use of GPS-equipped EPIRBs.[2]

A miniaturised EPIRB capable of being carried in crew members’ clothing is called a Personal Locator Beacon (PLB). Regulators do not view them as a substitute for a vessel’s EPIRB. In situations with a high risk of “man overboard”, such as open ocean yacht racing, PLBs may be required by the event’s organisers. PLBs are also often carried during risky outdoor activities upon land.

EPIRBs and PLBs have a unique identification number (UIN or “HexID”). A purchaser should register their EPIRB or PLB with the national search and rescue authority; this is free in most jurisdictions. EPIRB registration allows the authority to alert searchers of the vessel’s name, label, type, size and paintwork; to promptly notify next-of-kin; and to quickly resolve inadvertent activations.

A DSC radio distress signal can include the position if the lat/long are manually keyed into the radio or if a GPS-derived position is passed electronically directly into the radio.

A Mayday message consists of the word “mayday” spoken three times in succession, which is the distress signal, followed by the distress message, which should include:

HMS Romney aground off the Texelin 1804. In Richard Corbould’s print, Romney‘s blue ensign at the stern is shown inverted, as a sign of distress

When none of the above-described officially sanctioned signals are available, attention for assistance can be attracted by anything that appears unusual or out of the ordinary, such as a jib sail hoisted upside down.

During daylight hours when the sun is visible, a heliograph mirror can be used to flash bright, intense sunlight. Battery-powered laser lights the size of small flashlights (electric torches) are available for use in emergency signalling.

For hundreds of years inverted national flags were commonly used as distress signals.[3] However, for some countries’ flags it is difficult (e.g., Spain, South Korea, the UK) or impossible (e.g., Japan, Thailand, and Israel) to determine whether they are inverted. Other countries have flags that are inverses of each other; for example, the Polish flag is white on the top half and red on the bottom, while Indonesia‘s and Monaco‘s flags are the opposite—i.e., top half red, bottom half white. A ship flying no flags may also be understood to be in distress.[4]

If any flag is available, distress may be indicated by tying a knot in it and then flying it upside-down, making it into a wheft.[5]

To avoid pointless searches some devices must be reported when lost. This particularly applies to EPIRBs, life buoys, rafts and devices marked with the vessel’s name and port.

Expired flares should not be set off, as this indicates distress. Rather, most port authorities offer disposal facilities for expired distress pyrotechnics. In some areas special training events are organised, where the flares can be used safely.

EPIRBs must not be disposed of into general waste as discarded EPIRBs often trigger at the waste disposal facility. In 2013 the majority of EPIRB activations investigated by the Australian Maritime Safety Authority were due to the incorrect disposal of obsolete 121.5 MHz EPIRB beacons.[6]

The civilian aircraft emergency frequency for voice distress alerting is 121.5 MHz. Military aircraft use 243 MHz (which is a harmonic of 121.5 MHz, and therefore civilian beacons transmit on this frequency as well). Aircraft can also signal an emergency by setting one of several special transponder codes, such as 7700.

The COSPAS/SARSAT signal can be transmitted by an Electronic Locator Transmitter or ELT, which is similar to a marine EPIRB on the 406 MHz radio frequency. (Marine EPIRBs are constructed so as to float, while an aviation ELT is constructed so as to be activated by a sharp deceleration and is sometimes referred to as a Crash Position Indicator or CPI).

A “triangular distress pattern” is a rarely used flight pattern flown by aircraft in distress but without radio communications. The standard pattern is a series of 120° turns.

The recognised mountain distress signals are based on groups of three, or six in the UK and the European Alps. A distress signal can be three fires or piles of rocks in a triangle, three blasts on a whistle, three shots from a firearm, or three flashes of a light, in succession followed by a one-minute pause and repeated until a response is received. Three blasts or flashes is the appropriate response.

In the Alps, the recommended way to signal distress is the Alpine distress signal: give six signals within a minute, then pause for a minute, repeating this until rescue arrives. A signal may be anything visual (waving clothes or lights, use of a signal mirror) or audible (shouts, whistles, etc.). The rescuers acknowledge with three signals per minute.

In practice either signal pattern is likely to be recognised in most popular mountainous areas as nearby climbing teams are likely to include Europeans or North Americans.