Special Troops Command, (pol. Wojska Specjalne) is the 4th military branch of the Armed Forces of the Republic of Poland formed in early 2007. It is composed of special forces units and command: 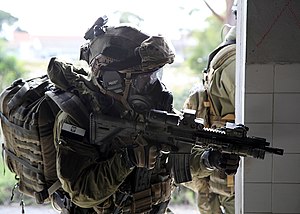 JW Formoza – name comes from the colloquial name of the units base, the post-German torpedo house in Gdynia, called “Formoza”.[4]