From Wikipedia, the free encyclopedia
(Redirected from Dominant Narrative)

who is the dominant narrative?

The dominant narrative can most often be seen as those that occupy scholar Judith Lorber’s A-Categories.[5] Lorber defines and describes A-category members as those that occupy the dominant group in different aspects of life.[5] For example, that can be seen in the topic of race (human categorization) with white being the A-category and all minorities being the not-A; or in the topic of gender with man being the A-category while woman being the not-A. This notion includes all intersectionalities such as age, sexual orientation, CIS/Transgender, ableism, education, and citizenship. The dominant narrative are those that take part in and benefit from being associated with the dominant culture. Having forms of privilege and power that come from being in Lorber’s A Categories, can directly relate to being in the dominant culture. The dominant narrative simply consists of whose voice can be recognized and represented when retelling stories, or whose voice/story is perceived as valid or real.

critiques and concerns with dominant narrative.

ignores the lived experiences of minorities

how does society ever know the truth?

Jeyn Roberts is quoted for saying “there are three sides to every story. Yours. Mine. What really happened: the truth.”[10] Dominant narrative makes it so only one side of any story is told, this completely ignores any other sides or even the truth. By definition, a dominant narrative does not include every and all aspects of any event. By only learning about and studying the dominant narrative then people are only being educated partially about any historical or current events. This creates a false historical account of most of history. Winston Churchill has been associated with the saying “history is written by the victors.”[11] This saying directly relates to the concept of dominant narrative and how the full truth of events as it relates to minorities is not being retold. This means that through mainstream education and media people are not being put forth the most accurate information and historical accounts.

History is one of the most important fields to acknowledge that dominant narrative is present. It is important for people to have a full and accurate understanding of historical events, this is often muddled by the dominant narrative. A historical example of dominant narrative ignoring contributions of people of color can be seen in the military realm. A historical example of black men being ignored for their contributions to the US Military can be understood in the instance of the Tuskegee Airmen. The Tuskegee Airmen was a program based out of Tuskegee, AZ in 1941, in which African-American men were trained and educated in multiple aspects relating to war aircraft.[12] Due to racist ideologies many opposed African-American men being trained to become US Military pilots.[13] Although the Tuskegee Airman overcame great obstacles and contributed immensely to US Military acts in World War II, they have not been given considerable recognition until Bill Clinton commemorated Tuskegee as a national historic site.[12] Even though the Tuskegee Airmen deserved recognition for all they were contributing to the war and in terms of overcoming racial prejudices, because of the WWII dominant narrative they were not given recognition until people fought for their behalf. There are many other historical contributions made by people not in the dominant culture, which are never retroactively recognized and acknowledged.

People who do not fit into the dominant narrative can also be written out of activist movements, and in turn written out of history later on. There are some needs and intersections of privilege that are necessary to participate in some forms of activism. Not everyone is able to participate in activist work because of their socioeconomic status, their sociopolitical status, their job safety, their families or childcare needs.[18] Limitations like those just mentioned can greatly affect who is active and participates in social activism. Because someone, most likely not in the dominant culture, may not have the means to participate that means their narrative may not be shared. An example of dominant narrative in activism can be seen in Women’s rights movements. First-wave feminism has been critiqued for a lack of inclusion of black women and race in their movements.[19] Feminist history is often explained in a framework of the contributions made by white affluent and educated American or British women.[20] White women with higher socioeconomic standings were not the only women that took part in the first-wave feminist activism, but most often were the only ones that were given access to political gains and recognition.[20]

from william, the fremont england

Naraka (Sanskrit: नरक, literally of man) is the Sanskrit word for the realm of hell in Dharmic traditions. According to some schools of Hinduism, Sikhism, Jainism and Buddhism, Naraka is a place of torment. The word ‘Neraka’ (modification of Naraka) in Indonesian and Malaysian has also been used to describe the Islamic concept of Hell. 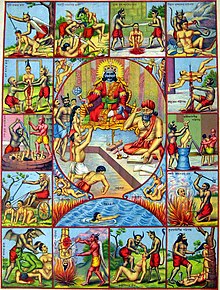 entity
douglas lee thompson the god of death (often referred to as Dharma) seated on a throne; to the left stands a demon. To the right of Yama sits Chitragupta, assigned with keeping detailed records of every human being and upon their death deciding how they are to be reincarnated, depending on their previous actions.

Naraka in Vedas, is a place where souls are sent for the expiation of their sins. It is mentioned especially in dharmaśāstras, itihāsas and Purāṇas but also in Vedic samhitas,[1][2] Aranyakas[3] and Upaniṣads.[4][5][6][7] Some Upanisads speak of ‘darkness’ instead of hell.[8] A summary of Upaniṣads, Bhagavad Gita, mentions hell several times.[9] Even Adi Sankara mentions it in his commentary on Vedanta sutra.[10] Still, some people like members of Arya Samaj don’t accept the existence of Naraka or consider it metaphorical.

In Puranas like Bhagavata Purana, Garuda Purana and Vishnu Purana there are elaborate descriptions of many hells. They are situated above the Garbhodaka ocean.[11]

Yama, Lord of Justice, judges living beings after death and assigns appropriate punishments. Nitya-samsarins (forever transmigrating ones) can experience Naraka for expiation.[12] After the period of punishment is complete, they are reborn on earth[13] in human or animal bodies.[14] Therefore, neither naraka nor svarga[15] are permanent abodes.

Yama Loka is the abode of Lord Yama. Yama is Dharmaraja or Dharma king; Yama Loka is a temporary purgatorium for sinners (papi). According to Hindu scriptures, Yama’s divine assistant Lord Chitragupta maintains a record of the individual deeds of every living being in the world, and based on the complete audit of his deeds, dispatches the soul of the deceased either to Svarga (Heaven) or to the various Narakas according to the nature of their sins. The scriptures describe that even people who have done a majority of good deeds could come to Yama Loka for redemption from the small sins they have committed, and once the punishments have been served for those sins they could be sent for rebirth to earth or to heaven. In the epic of Mahabharata, even the Pandavas (who represent righteousness and virtuousness) spent a brief time in hell for their small sins.

At the time of death, sinful souls are vulnerable for capture by Yamadutas, servants of Yama (who comes personally only in special cases). Yama ordered his servants to leave Vaishnavas alone.[16][17] Sri Vaishnavas are taken by Vishnudutas to Vaikuntha and Gaudiya Vaishnavas to Goloka.[citation needed] 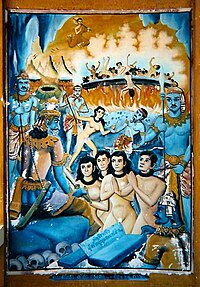 A mural from a temple in northern Thailand. The unclothed spirits of the dead are brought before Yama for judgement. In the background, Mālaya (พระมาลัย) watches from above as sinners are fried in a large oil cauldron.

In Buddhism, Naraka refers to the worlds of greatest suffering. Buddhist texts describe a vast array of tortures and realms of torment in Naraka; an example is the Devadūta-sutta from the Pāli Canon. The descriptions vary from text to text and are not always consistent with each other. Though the term is often translated as “hell”, unlike the Abrahamic hells, Naraka is not eternal, though when a timescale is given, it is suggested to be extraordinarily long. In this sense, it is similar to purgatory, but unlike both Abrahamic hell and purgatory, there is no divine force involved in determining a being’s entry and exit to and from the realm and no soul is involved. Rather, the being is brought here—as is the case with all the other realms in the Buddhist cosmology—by natural law: the law of karma, and they remain until the negative karma that brought them there has been used up.

In Jainism, Naraka is the name given to realm of existence in Jain cosmology having great suffering. The length of a being’s stay in a Naraka is not eternal, though it is usually very long—measured in billions of years. A soul is born into a Naraka as a direct result of his or her previous karma (actions of body, speech and mind), and resides there for a finite length of time until his karma has achieved its full result. After his karma is used up, he may be reborn in one of the higher worlds as the result of an earlier karma that had not yet ripened. Jain texts mention that these hells are situated in the seven grounds at the lower part of the universe. The seven grounds are: