Embassy of the Socialist Republic of Vietnam

Vietnam, officially the Socialist Republic of Vietnam, is the easternmost country on the Indochina Peninsula. With an estimated 94.6 million inhabitants as of 2016, it is the 15th most populous country in the world. Vietnam is bordered by China to the north, Lao…

The đồng (/dɒŋ/; Vietnamese: [ˀɗɜwŋ͡m˨˩]; sign: ₫; code: VND) has been the currency of Vietnam since May 3, 1978. Issued by the State Bank of Vietnam, it is represented by the symbol “₫”. Formerly, it was subdivided into 10 hào, which were further subdivided into 10 xu, neither of which are now used. Since 2012 the use of coins has decreased greatly, and since 2014 coins are generally not accepted in retail, but will still be accepted in some, but not all, banks.[citation needed]

The word đồng is from the term đồng tiền (“money”), a loanword from the Chinese tóng qián (Traditional Chinese: 銅錢; Simplified Chinese: 铜钱). The term refers to Chinese bronze coins used as currency during the dynastic periods of China and Vietnam. The term hào is a loanword from the Chinese háo (Chinese: 毫), meaning a tenth of a currency unit. The term xu comes from French sous meaning “penny”. The sign is encoded U+20AB ₫ DONG SIGN (HTML ₫).

In 1946, the Viet Minh government (later to become the government of North Vietnam) introduced its own currency, the đồng, to replace the French Indochinese piastre at par. Two revaluations followed, in 1951 and 1959; the first was at a rate of 100:1, the second at a rate of 1,000:1. 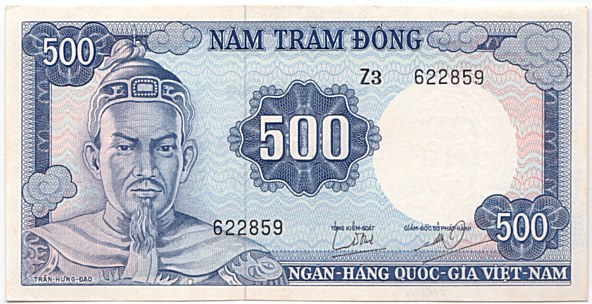 Notes dually denominated in piastres and đồng were issued in 1953 for the State of Vietnam, which evolved into South Vietnam in 1954. On September 22, 1975, after the fall of Saigon, the currency in South Vietnam was changed to a “liberation đồng” worth 500 old Southern đồng.

After Vietnam was reunified, the đồng was also unified, on May 3, 1978. One new đồng equalled one Northern đồng or 0.8 Southern “liberation” đồng.

On September 14, 1985, the đồng was revalued, with the new đồng worth 10 old đồng. This started a cycle of chronic inflation that continued through much of the early 1990s.[2]

In 1978, aluminium coins (dated 1976), were introduced in denominations of 1, 2, and 5 hào and 1 đồng. The coins were minted by the Berlin mint in the German Democratic Republic and bear the state crest on the obverse and denomination on the reverse. Due to chronic inflation, these coins lost all their relevant value and no coins circulated for many years after this series.

Commemorative coins in copper, brass, copper-nickel, silver, and gold have been issued since 1986, but none of these have ever been used in circulation.

The State Bank of Vietnam resumed issuing coins on December 17, 2003.[3] The new coins, minted by the Mint of Finland, were in denominations of 200, 500, 1,000, 2,000, and 5,000 đồng in either nickel-clad steel or brass-clad steel. Prior to its reintroduction, Vietnamese consumers had to exchange banknotes for tokens with a clerk before purchasing goods from vending machines. This was also to help the state ease the cost of producing large quantities of small denomination banknotes which tended to wear hard after every transaction. Many residents expressed excitement at seeing coins reappear after many years, as well as concern for the limited usefulness of the 200 đồng coins due to ongoing inflationary pressures.[4] There had been rumors of children mistaking coins for candies, and some vendors believing them to be fakes, since coins had long been absent from use in Vietnam, but these reports have been difficult to verify.

Since the launch of the 2003 coin series, the State Bank has had some difficulties with making the acceptance of coins universal despite the partial discontinuation of smaller notes, to the point of some banks refusing coin cash deposits or the cashing in of large numbers of coins. This has prompted laws requiring private and municipal banks to transact and offer services for coins and the full discontinuation of small denomination and cotton based notes.

Five banknote series have appeared. Except for the current series, dated 2003, all were confusing to the user, lacking unified themes and coordination in their designs. The first table below shows the latest banknotes, of 100 đồng or higher, prior to the current series. On June 7, 2007, the government ordered cessation of the issuance of the cotton 50,000 and 100,000₫ notes.[citation needed] They were taken out of circulation by September 1, 2007. State Bank of Vietnam 10,000 and 20,000₫ cotton notes are no longer in circulation as of January 1, 2013.[12]

In 2003 Vietnam began replacing its cotton banknotes with plastic polymer banknotes, claiming that this would reduce the cost of printing.[13] Many newspapers in the country criticized these changes, citing mistakes in printing and alleging that the son of the governor of the State Bank of Vietnam benefited from printing contracts.[13] The government clamped down on these criticisms by banning two newspapers from publishing for a month and considering other sanctions against other newspapers. Even though the 2003 series banknotes listed in the table below have now completely replaced the old notes of the same denominations, as of 2019 the cotton fiber banknotes of 200, 500, 1000, 2000 and 5,000 đồng still remain in wide circulation and are universally accepted.[citation needed]

A commemorative polymer 50-đồng banknote dedicated to the fiftieth anniversary of the State Bank of Vietnam was issued in 2001, but its face value is so tiny that it clearly was meant only for collectors. The note is available in three forms, by itself, in a presentation folder or in a presentation folder in an envelope. In 2016, a 100-đồng banknote was issued on cotton-based paper to commemorate the 65th anniversary of central banking.

To support the growing industrial need for large money transactions, the State Bank issued “Bearer’s Checks” or “State Bank Settlement Checks” (Ngân Phiếu Thanh Toán) in denominations from 100,000 to 5,000,000 đồng.[15] To prevent counterfeiting, these notes had many degrees of protection, their designs were changed every five to six months, and they had expiration dates five or six months after the date of issue. The checks worked until the banking system was upgraded to handle electronic transfers of large amounts of đồng, making most large cash transactions unnecessary.

Other uses of đồng

In the Vietnamese language, “đồng” can be used as a generic term for any currency by adding the name of a country as a qualifier. This practice is more common for more esoteric units of currency.

In present-day Vietnam, một ngàn / một nghìn (one thousand) is widely understood as one thousand đồng.